Updated 28-Nov 2019: Following Ray Taylor’s talk on analysing meteor showers in December 2016, he has kindly sent us images showing 2016 data and a summary for early 2017… and more examples below:

Summary: Meteors in January 2017 by Ray Taylor and his colleagues at Nemetode.org

OMAP streams - shows a solar system orbit plot of major streams. Note how the Earth (its orbit is marked by the blue dot)  is bombarded by interplanetary material throughout the year. The plot would be very cluttered if we added all data 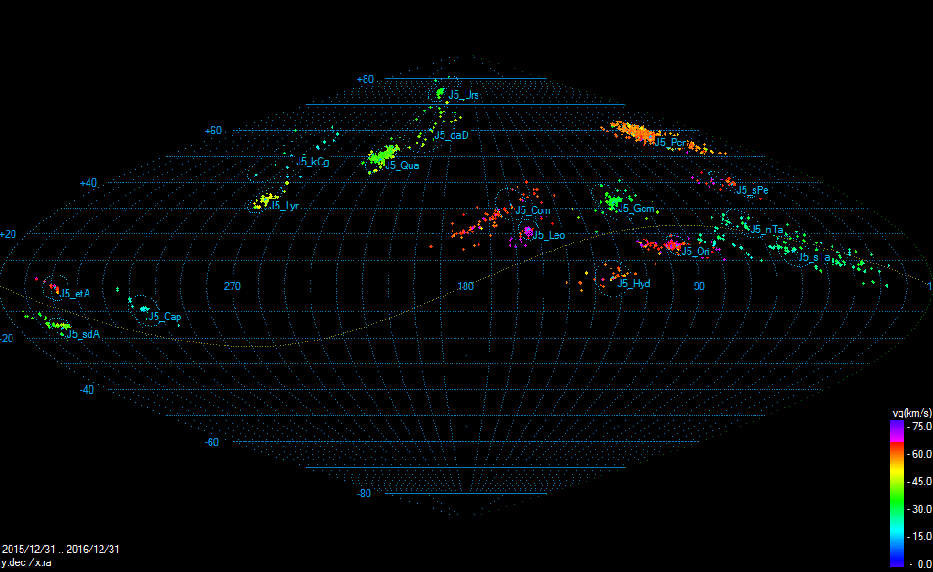 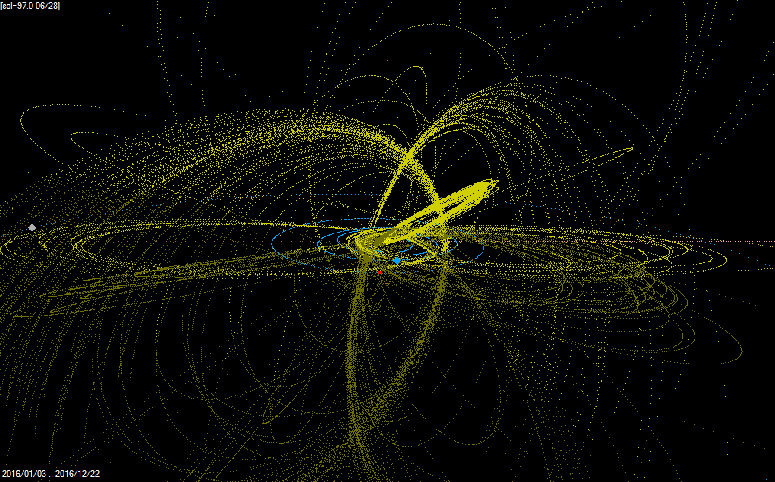 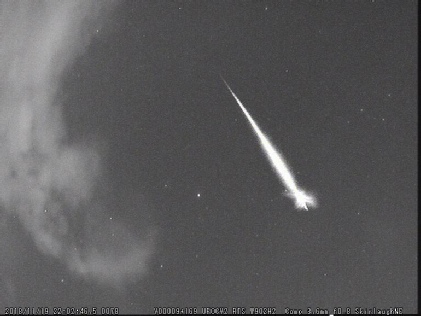 Initial analysis suggests an early December Alpha Draconid with an Apparent Magnitude of -4.2; checking around Nemetode.org - this appears to be the first this year!

This particular Weak Meteor Shower usually starts around now and appears to have two peaks, the second taking place during the time of the Quadrantids in the first week of the New Year.

BUT! This may be an anomaly because the Radiant positions of both meteor showers are relatively close together so there may be mis-allocation by the analytical software.

A first look at this year's Orionids

“Thought you and HERAS members would be interested in this ‘early look’ at the 2018 data set for the Orionids.

Huge thanks to Alex Pratt for getting the data out so quickly.

Many of us [Ed: members of Nematode] recorded good numbers of Orionid meteors during the past few weeks, the debris from comet 1P/Halley.

I've attached the ground map from 180 multi-station Orionids captured between September 24 and November 4. The trail map for the same interval shows how their radiant traverses from R to L above Orion. moving 0.7 degrees per day in RA and 0 degrees per day in Dec.

Unlike some showers that have a brief peak of activity, the Orionids can put on a good display for 2 or 3 nights. The second radiant plot is for the night of October 21/22, from 48 multi-station meteors. These give a radiant point of RA 95.4 (6h 22m) and Dec 15.4, at solar longitude 208.4 degrees. Their average geocentric velocity (Vg) was 65.7 km/s. As usual, our results agree very well with those of professional workers listed in the IAU MDC. 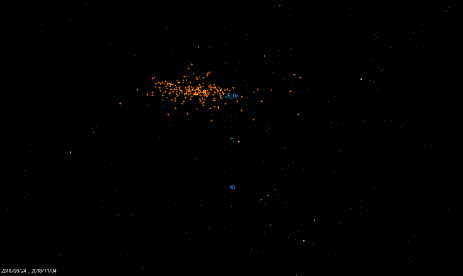 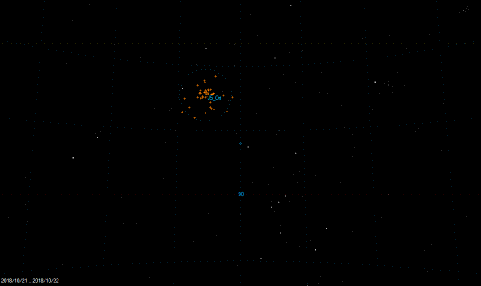 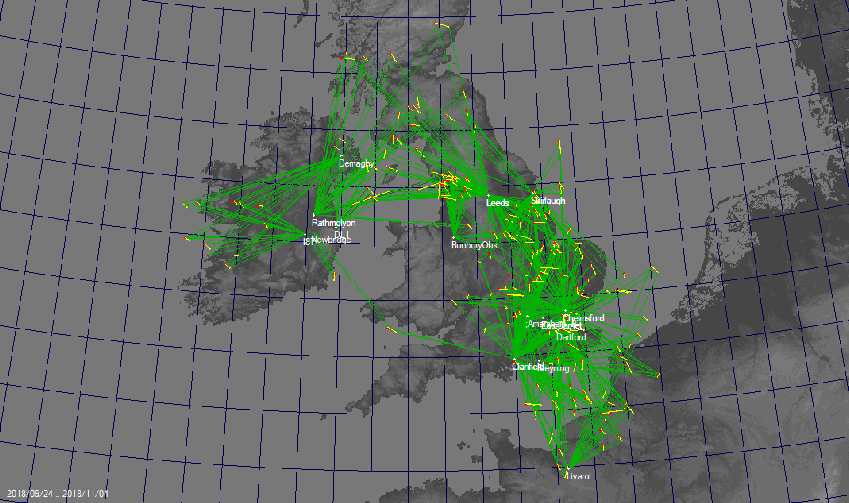 An interesting Meteor capture, because it was classed as a “theta Centaurid”.

This is a Weak shower taking place late January to late March, however it is regarded as a “southern hemisphere event”.

The image has been rotated to show the true horizon, bottom of image.

The direction of travel is Right to Left; the “curvature” is an artefact of the camera lens – wide angle. The two “bright” areas towards the Left end indicate “Fragmentations” took place.

The Apparent Magnitude is -3; reference “The Plough” at the “top” of the photograph.

During Wednesday 24th and Thursday 25th July 2019 there was a “Near Miss” by an Asteroid, “Asteroid 2019OK”; it passed between the orbits of Earth and our Moon at a distance of 43,500 miles from Earth.

Often asteroids have an associated debris field which can give rise to “Meteor Showers” eg the Quadrantids. These Debris fields sometimes contain relatively large pieces of material and give rise to “Fireballs”.

Both have the same Orbital characteristic, very similar Velocity and Radiant characteristic (as can be seen from the images) they appear to be coming from the same direction albeit 23hours apart.

Both have Apparent Magnitude of > -6.1 and were classified as “Sporadics”, meaning they are not from a known Meteor Shower.

When subjected to Analysis, both appear to have an initial Mass of between 35 and 100g, with a size somewhere between 20 and 50mm, depending upon which Assessment System is used. 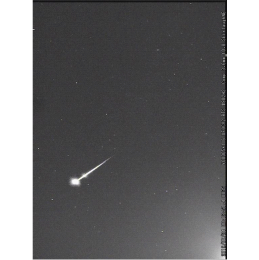 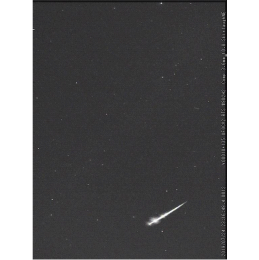 On July 25th 2019 at 214733UTC one of my cameras (Skirlaugh SE) captured an event and Jim Rowe's camera at East Bartnet (N London) captured the same event.

These displays are typically Red in colour, however our cameras are mono-chrome so only get a Black & White image!

We both have video of the event which has been sent to our website and should be "active" in a few days. 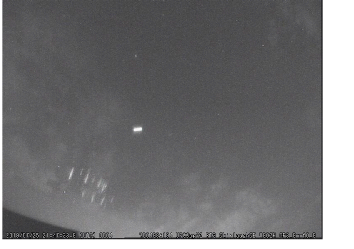 And, below the same again by Jim Rowe, East Barnet

The Significance of Meteor Orbit Determination

During my talk in October 2019 to HERAS I commented that knowing the Orbit data for a Meteor event can indicate information about the source of the Meteoroid.

On October 28th at 0153.53UTC there was a Bright meteor and my SouthSEast camera captured the entire event, see below for the “stacked image”:

The direction of travel - Right to Left.

Initial Single Station analysis suggested a “Sporadic meteor” - did not belong to a Meteor Shower and had an Apparent Magnitude of -3.1

It is customary within Nemetode.org to circulate these images around the group along with the Initial Analysis asking if anyone else had the same capture.

About 5 minutes after that e-mail had been sent I received the following from Alex Pratt and William Stewart (founder members): 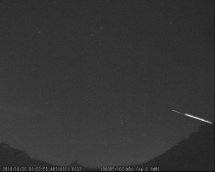 Again my image has fewer visible stars (Reference stars) to enable my image and data to be used for Triangulation and detailed analysis – my SSE view suffers light pollution -significantly more since the Wind Turbine factory was opened.

However there was sufficient data available from the other images and data files to enable some detailed analysis. 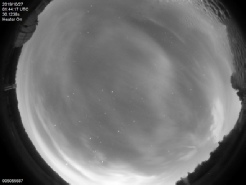 It was also recorded on the Bayfordbury all-sky camera – Left and look in the lower Right hand corner .

The Analysis report includes the Ground Map below:

Would have been spectacular sight in the skies of Lincolnshire!

The Orbital Plot is below and is most interesting: 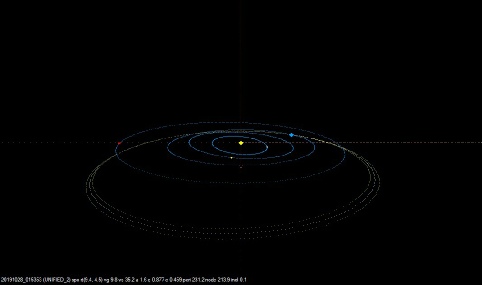 It is concluded that it was a sporadic meteor with absolute mag -1.5. It had a really slow Vg of 9.8 km/s and its orbital inclination was almost 0 degrees with a Tisserand's parameter of 4.2, suggesting it was Asteroidal in nature rather than Cometary.

We can indicate Asteroidal since the orbit can be seen to go out past Mars (the Red Dot on the outer Blue Ring) which is typical of an object coming from that region of the Solar System.

Unfortunately, those cameras fitted with Diffraction Grating did not capture the event, hence no Spectrum data. Similarly, none of the GRAVES detector systems had any recordings.

Special Thanks to: Alex Pratt, William Stewart, Nick James and Tracie Heywood for their Images, Comments and Analytical data. 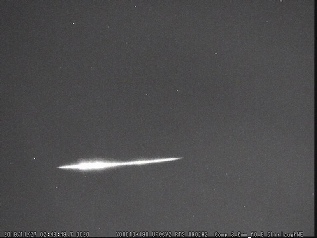 This meteor shower takes place within the boundaries constellation of Auriga. It occurs between 1 November - 23 November, with the peak occurring on the 15-November every year.

The Zenith Hourly Rate (or how many you expect to see during the hour) is 8.

The ZHR can radically increase if the comet or associated object is close by.

The comet Kiess (C/1911 N1) is the source of the material that causes the meteors.

The speed/velocity of the Meteor Shower particles is 36 km/s.

It is notable for becoming a bright naked-eye object of second magnitude, with a narrow straight tail of up to thirty degrees in length and a distinct blue colour; this colour seen in some comets is usually a result of the emission of carbon monoxide ions. 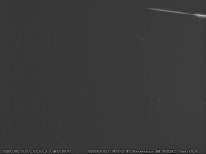 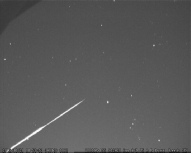 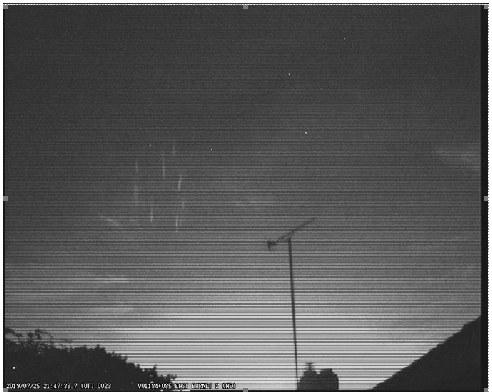