Details of our speakers for the new season are here, and the next presentation will be on

Our room in the Cottingham Civic Centre is booked for the season, and we start at 7:30pm. Doors open 7:15pm

If you wish to be added to (or removed from) the mailing list, or need help, please email the secretary.

NB:  Meetings are held at our usual venue, the Civic Hall in Cottingham:

We meet in the room above the main hall: there is a lift.

On the evening of the 17th of September, HERAS, along with East Riding Astronomers and Brough Astronomy will be providing an astronomy experience as a component of the fundraiser for the local Dove House Hospice. The annual Dove House ‘Starlight Stride’ evening walk will take place around the grounds of Burton Constable Hall and we intend to provide a bit of extra starlight at the end of the walk with a number of telescopes and a chance to have a short guided tour of the night sky (assuming clear skies of course!). More details available here as we know them…. and here is a link to the Dove House website

On March 7th 2020, HERAS hosted a British Astronomical Association ‘Back to Basics’ day. This was part of their national programme, and was held at the Civic Centre in Cottingham  - our meeting venue. The cost was £5 for BAA members, £6 for others.

Public lecture at the University of Hull

Title: ‘Can Science explain everything?’ A theoretical physicist explores science and faith

Ard Louis is Professor of Theoretical Physics at the University of Oxford where he leads an interdisciplinary research group studying problems at the boundary between chemistry, physics and biology. He also writes and speaks widely on science and faith. He recently made the 4-part documentary ‘Why Are We Here?’ with David Malone and appeared in ‘The Story of God’ with Morgan Freeman.

From software engineer to astronaut

Before becoming an astronaut, Steve worked as a software engineer and has a degree in Engineering Physics and a doctorate in Computer Science.

Steve has been on three space missions having flown on two Space Shuttle flights, STS-117 and STS-119, and Expedition 39 to the International Space Station (ISS) aboard the Soyuz. He was commander of the ISS  and has also served as a CAPCOM for ISS and Space Shuttle missions.

He has logged nearly 200 days in space and completed five spacewalks totalling 28 hours and 5 minutes. He is a recipient of the NASA Exceptional Achievement Medal.

Our member and Nematode contact Ray Taylor has provided further images and details of July’s images. See Ray’s gallery page for images of Sprites, and go to the ’extra information’ page for the latest meteor tracking details.

Mike is the most experienced British-born astronaut in the history of human space travel having clocked over 373 days in space, flown on six Space Shuttle missions and a Soyuz, and commanded the International Space Station. He was the first Briton to perform a space walk, during which he saved the Hubble Space Telescope. Mike was also responsible for saving the Russian Mir Space Station when it was tumbling out of control and he has been inducted into the United States Astronaut Hall of Fame. He gave a fascinating talk about these experiences and shared his stories at this special event.

“We invite you and your Society members to join the Loughton Astronomical Society on the 10th November 2018 to celebrate our 50th Anniversary.

Our 50th celebrations will start with displays, demonstrations and an indoor planetarium in the morning, followed by lectures from top astronomers in the afternoon.

Please visit www.las-astro.org.uk for details and the opportunity to purchase tickets.”

Phil Caygill, who used to be a HERAS member until work clashed with Monday evenings contacted us about this event. Phil is a member of the Royal Society of Chemists.

The Society hosted this free lecture at the University of Hull on Tuesday 23rd October 2018, all HERAS members were welcome.

The lecture was by Dr Gareth Few and Dr David Benoit of the University of Hull.

The FAS 2018 Convention and AGM was be held at the Spring Lane venue of the University of York on Saturday, 22nd September.  Unlike previous years, however, the Convention part of the day was also open to the public.

As with previous years they’ve managed to keep the cost low so that it was just £6 for members of FAS societies and £8 for non-members. Half-price for those under 16 years-old or, on presentation of a current student ID card, students from the University of York.

Six great talks were on the agenda.

A notice from Professor Brad Gibson of Hull University:

“The British Science Festival is the biggest thing in the region this year … the programme is absolutely jam-packed .. check out the 100+ free events at:

Trip to the National Space Centre in Leicester

Our sister society, Brough Astronomy, organised a coach trip to the National Space Centre on Wednesday 8th August. The cost was £26, including admission and the coach journey.

There were talks about our Star, telescopes with solar filters observing the Sun in real time, and buying and making solar telescopes to take away to observe the sun yourself safely after the event, making rockets and finding out how our Star rules the Solar System, and other activities for both children and adults.

The University of Hull was delighted to be able to celebrate and showcase the fantastic research and teaching from the E. A. Milne Centre for Astrophysics. The Centre takes a fresh and dynamic approach to the big questions that have fascinated humankind for thousands of years. Details here: 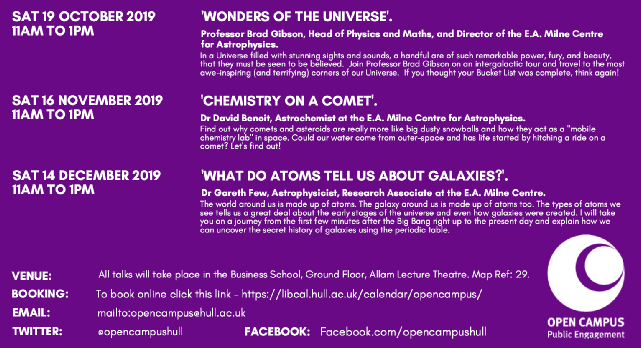